What are the Odds?

In March of '77 I was getting pretty bored with the last car I had bought and my employer was paying me way too much money.  The snow had melted and I was ready for something different.  Driving by the GM showroom one Thursday morning something very bright and yellow caught my eye.  There it was and I could not leave the showroom until I saw that sold sign on the windshield.  The '77 Corvette was mine.  I never slept a wink that night and I was the first guy in the bank Friday morning.  When I got to the GM dealer they had taken it out of the showroom and it was waiting outside the door for me.  It was an L-48 4-speed with power windows, 8-track, sport mirrors, RWL Firestone tires and rear defrost...price tag $11,650 CND. 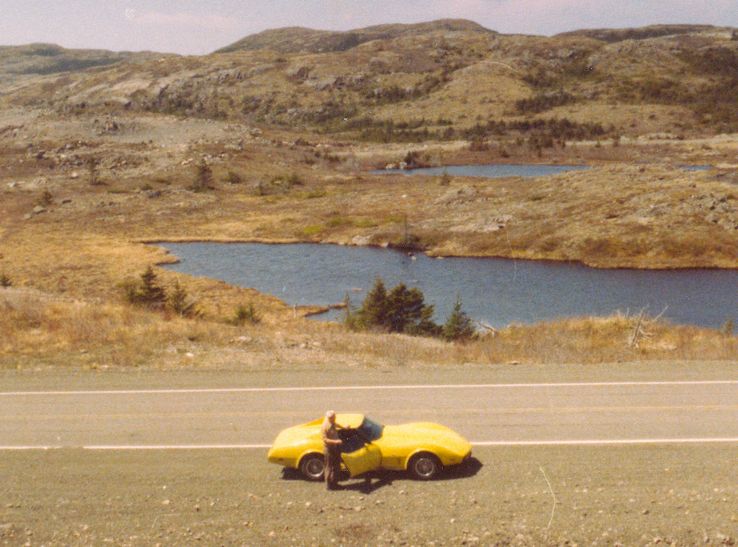 How many times have you said to yourself: I wonder what become of the xxxxxx that I had back in 19xx?  What are the odds of finding a 33 year old car that you purchased new?  For some cars, the odds are not great.  For Corvettes the odds are slightly better because of fiberglass bodies versus steel.  But, in a harsh unfavorable climate where salt is spread on highways for five months of the year like we have here in Nova Scotia, what are the odds of finding your original 33 year old Corvette?  When I started looking for the car, I knew the odds of finding it would be pretty slim in view of the fact I drove the car through three winters.  I thought that if I ever did come across the car it would be in a salvage yard.  It was after acquiring my present '77 that I started wondering what may happened to my original '77.  I knew the guy that I had sold it to and also the third owner.  I contacted both of these guys but was not able to get much information from them.  I then started talking to other Corvette owners at car shows and a few leads struck brick walls.  I then turned to searching Auto Trader magazines and online websites to no avail.

It was the summer of '09 and I was doing my weekly search of kijiji and this For sale ad of a '77 yellow Corvette popped up.  I opened the ad and looked at the first picture studying it carefully. 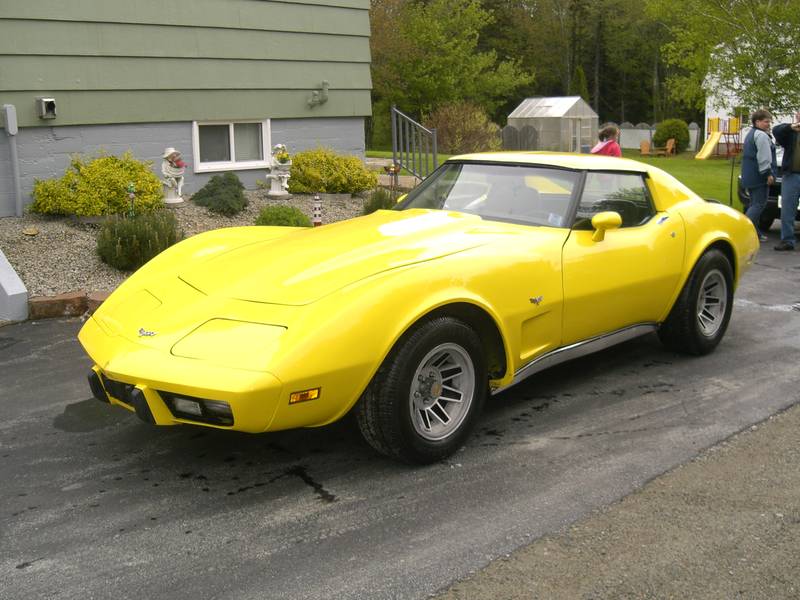 I studied the picture for a while and noted that the car had factory sport mirrors.  It was obvious that the wheels had been changed and driving lights had been mounted in the grill.  Also there was no alarm switch to the left of the flags making me think this was a much later car than mine.  I also noticed the front fender looked to be from a later C3.  So I continued on to the next picture. 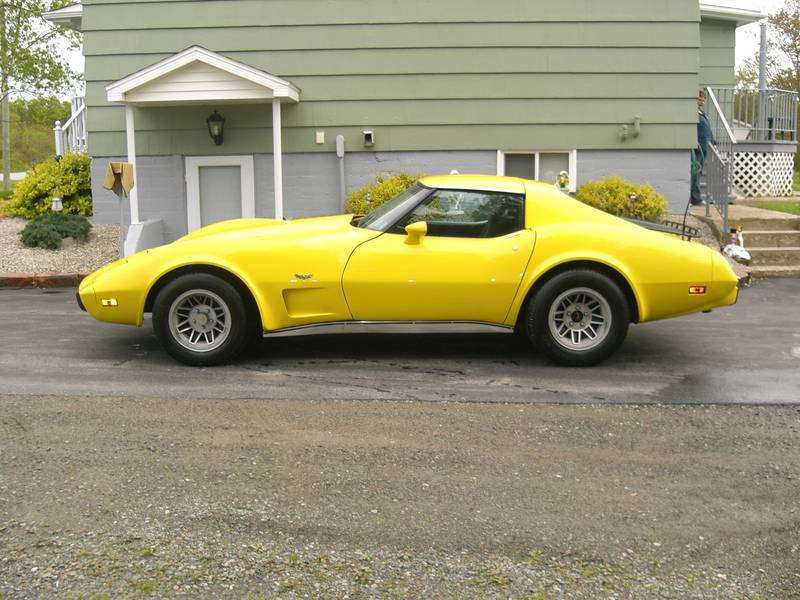 After viewing this picture I noted that the car had a luggage rack that had been painted black at some point.  I had added a factory rack about a year after I had bought my original '77.  I also noticed that the radio antenna was not original.  I had swapped my antenna for a CB antenna in '78.  So on to the last picture in the ad. 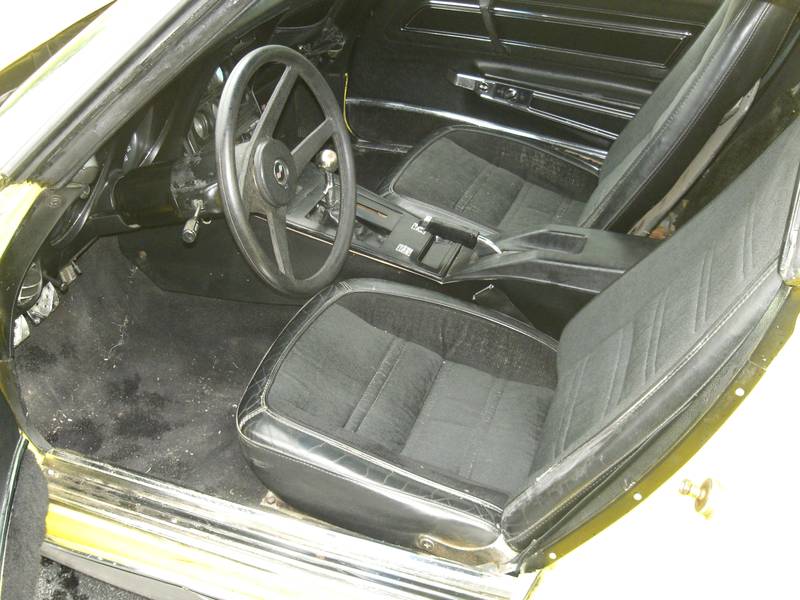 My first thought, this car has the same seat option and Vega steering wheel non-tilt option as my car had.  I kept studying the picture.  Yep, it is a 4-speed car and has power windows.  And then all of a sudden I spotted a confirming clue and called out "Oh my God, this is my original '77, it has to be".  If you look just right of the signal light switch and below the steering column, you will see a hole in the side of the console.  I put that hole there to bring a CB microphone through.  I had mounted the CB in one of the storage compartments and then run the cable up through and out that hole.  I was pretty excited at this point and immediately responded to the ad requesting more info including car location and VIN sequence number.  Within 24 hours the owner responded and I was able to confirm that this indeed was my original '77 car.

It was about a couple of months later that my wife and I finally got to see the car and meet Brian, the owner of the car.  It was a pretty exciting day for us all.  Brian lives about a three hour drive from our home and this was the last drive we got to make in our present '77 Corvette before putting it away for the winter.  Here are some pictures of Brian's car along with some of both cars parked side by side. 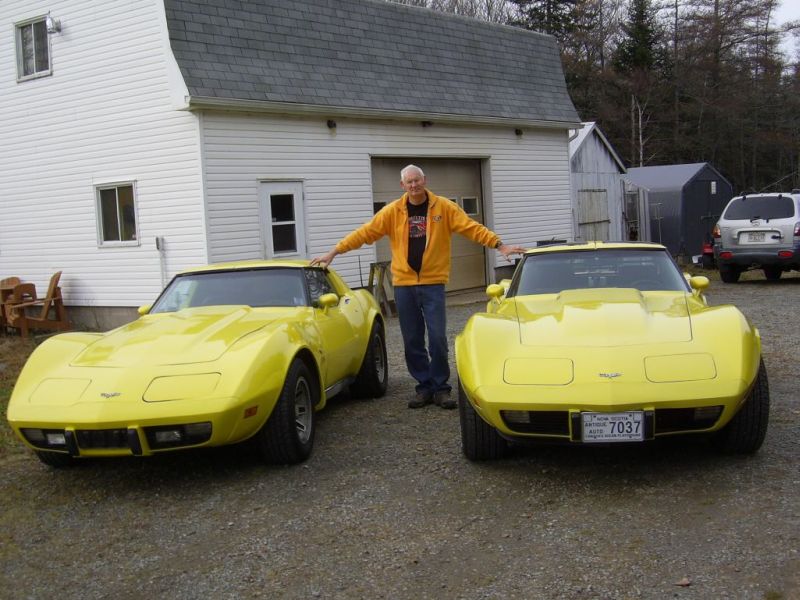 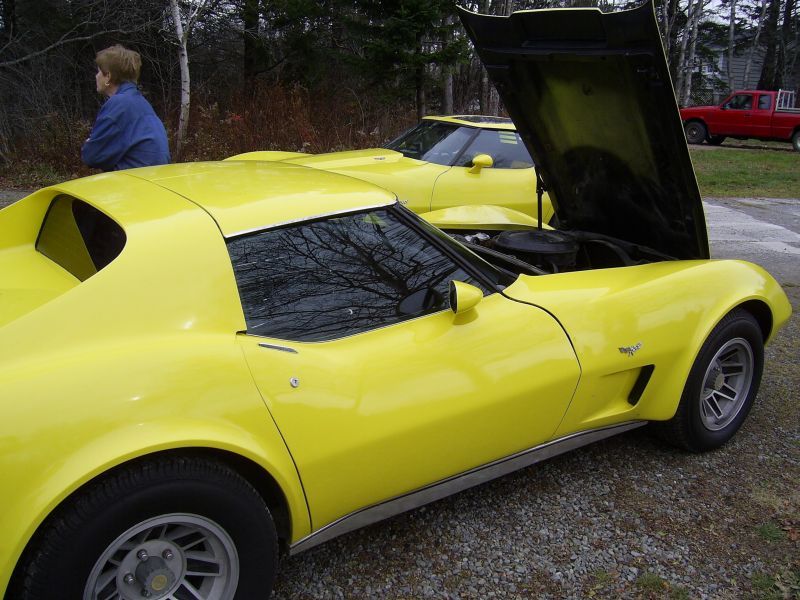 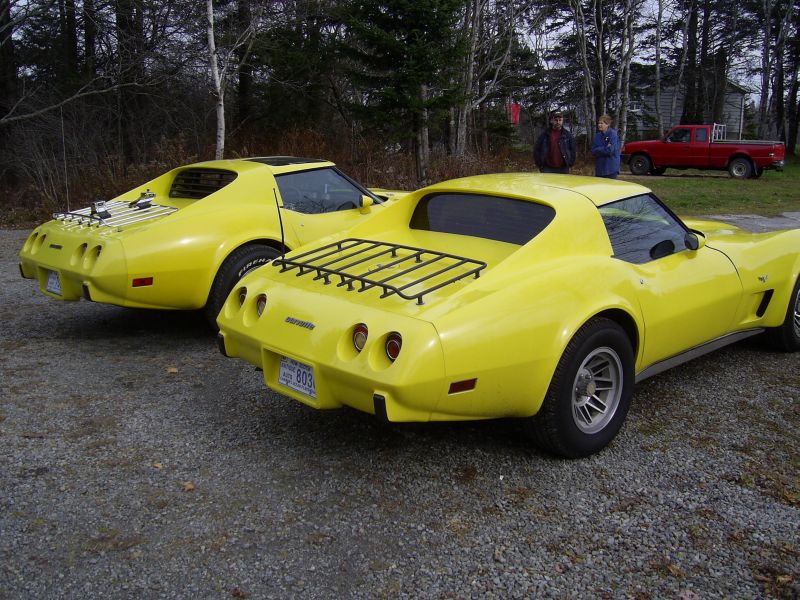 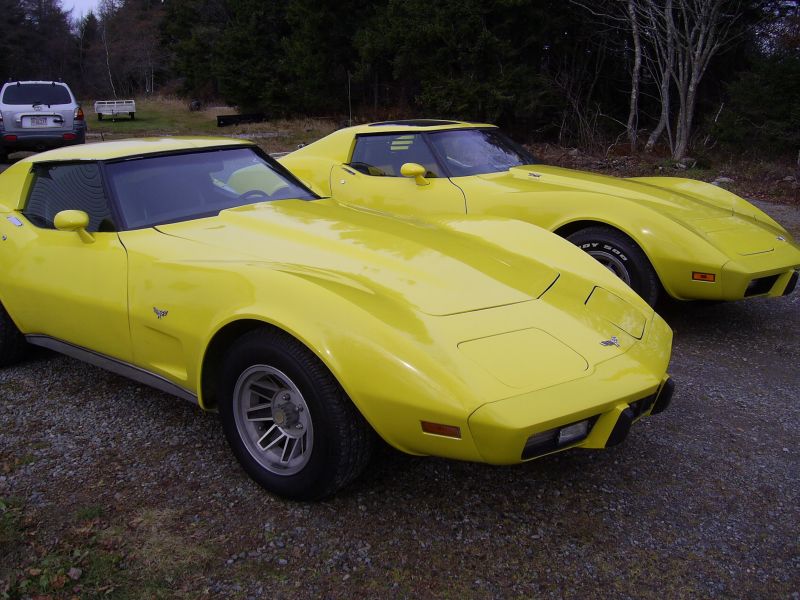 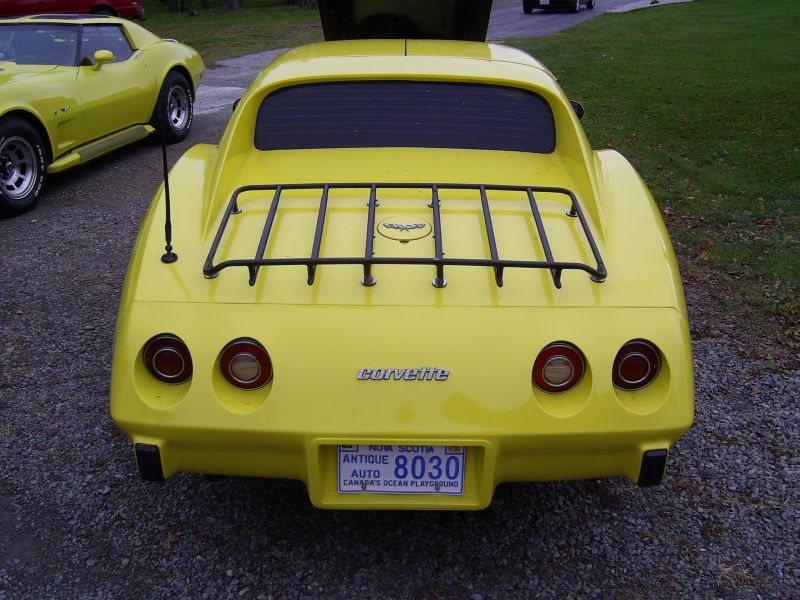 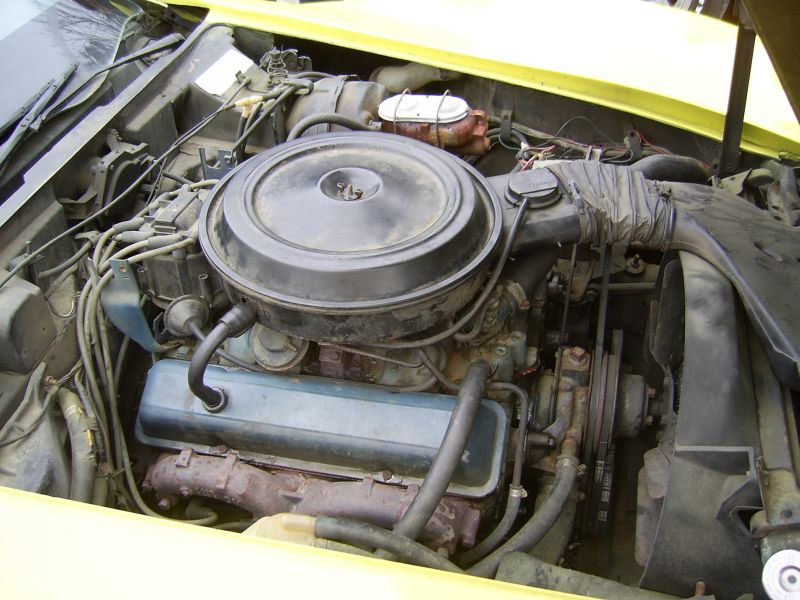 Brian is a super nice guy and has been around cars for quite a while.  Brian has only had the car for a short time and he is not sure just what he wants to do with it.  I gave the car quite a going over and I was very surprised at how original most of it was.  The odometer is reading just over 100K miles and I believe that it may be correct.  The engine is original numbers matching and it runs and sounds great, very quiet and smooth.  It does not look like the engine has ever been apart.  The water pump looks original and the alternator is correct as well.  One of the ram exhausts has been replaced at some point in time.  The chrome loom for the wiring is missing along with a couple of vacuum hoses.

The front fender on the driver's side has been replaced with one from a later C3, hence the wider flare and why the alarm switch is missing.  I could not see any structural damage so I am not sure why the fender was replaced.  The car looks pretty clean underneath from what I could see.  The universal and half shaft joints are the solid originals I believe.  I could not get a close look at the frame but from what I could see, it looks pretty solid in the vulnerable areas just ahead of the rear wheels.

The interior is pretty original with the exception of the gage mix.  Only one gage is original and the others are from pre and post '77.  Seats, carpet, door panels, console, speedo and tach are the original.

We have no idea how many owners the car has had over the past 33 years but it is amazing that it has survived all these years and to be in the condition that it is.  If I had room for it in my garage it probably would be sitting there beside our present '77.  As I have already mentioned, Brian is not sure what he plans to do with the car.  If you happen to be interested in speaking to Brian about it, please let me know and I will get you in contact with him.